Soon Hector, the Director, becomes upset with Lucky because Lucky always seems to be going in a direction that is opposite that of his brothers on the set.  When an earthquake hits on the day of a big shoot, however, it is precisely Lucky's quality of turning opposite of everyone else that saves the day.

Several elements of style in "Lucky..." are meant to encourage language development in emerging readers. Rhyming patterns can be found in the characters: Hector is the Director, and William T. Stagent is the Hollywood agent, and students may discover by themselves that Mrs. Poppyset loves opposites!

Language skills in "Lucky..." can be further explored through Lucky's word matching game, the online flashcards, and listening to Lucky on the audio cd! 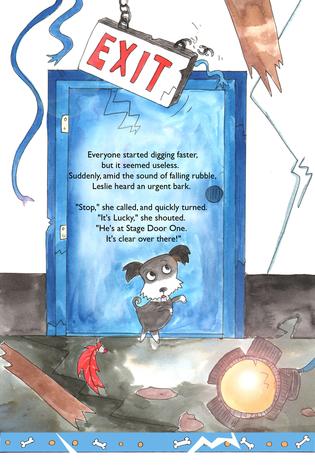 Lucky is a loveable little puppy who lives with Mrs. Poppyset and his brothers under the “H” of the “Hollywood” sign in Los Angeles, CA.  As Lucky scampers about in his world, however, he doesn’t appear to be all that lucky. You might even say that Lucky is the opposite of lucky! But Mrs. Poppyset is kind, Lucky’s brothers, Shortstuff and Rags, are fun, and Lucky is happy enough.  When William T. Stagent, the Hollywood agent, shows up on the scene, he whisks Lucky and his brothers off to the set of Parapup pictures to become the new "spokesdogs" for the popular Bow-Wow-Chow-Now Commercials.